Hope in a world of plastic: An open schooling experience 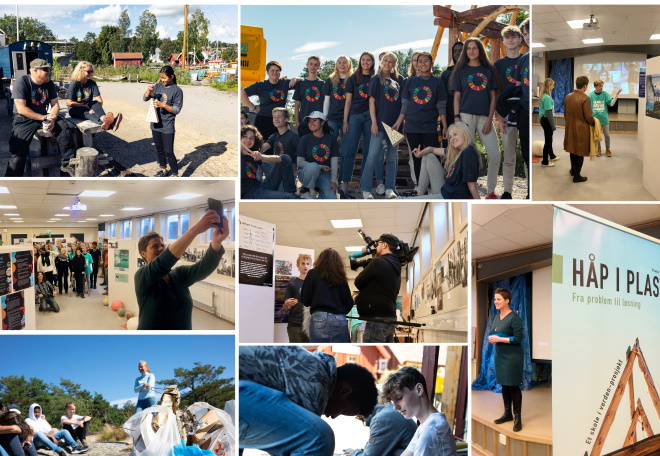 What does it mean to create hope in a time when a generation of young people are taking to the streets to warn the powerful elites of the ecological crisis? What is the role of the school as young people enter a time characterized by major, structural upheavals, and an uncertain future?

These are critical questions that are currently being explored in an ongoing project in Fredrikstad in the southeastern region of Norway. It is a project on plastic and hope, done within the frame of the EU-funded research consortium Science Education for Action and Engagement towards Sustainability" and its local Norwegian network. It is a project where students and teachers at Frederik II Upper Secondary School, in close collaboration with researchers in SEAS and local stakeholders, are invited to develop critical perspectives on plastic pollution, by engaging in the interfaith art project “Hope Cathedral”.

This ambitious art project—which draws from plastic waste to create a space for hope and co-creation—is currently under construction. In different capacities, the students were invited into conversations about its role and place in the camp for the environment, and to contribute to the actual construction process. In this, the students got the chance to work at a local company transforming micro-plastic into colourful building material for roof of the Hope Cathedral.

This innovative collaboration gave room for connecting minds, hearts, and hands – both inside and outside school. The students were invited to explore the chemistry behind plastic, to critically investigate what larger societal structures create the plastic problem, to explore the power of pictures and video, and the role of critically engaging with scientific sources.

Moreover, the students were invited to search for and document stories of solutions to the plastic problem – at the same time as they themselves were becoming collaborators and co-conspirators in one such story of change.

The project has created countless engaging conversations both in the classroom and outside, where the students have been sharing experiences, learning, and insights, and exploring new ways of acting and being.

All of this was channeled towards a final exhibition at the school, where the students created, curated and presented scientific posters, pictures, illustrations, artwork, games and films they had created themselves. The exhibition was open to the public and attended by families, fellow students, teachers, policymakers, media, and others. The project and the exhibition have even generated engagement all the way up to the national level, with the visit of the State Secretary Maren Hersleth Holsen from the Norwegian Ministry of Climate and Environment.

This exhibition is a testament to the work that has been done so far at Frederik II Upper Secondary School. It presents the momentary climax of an open-ended, strong narrative of how Open Schooling can activate, inspire, and mobilize cutting-edge learning about, and action for, a more sustainable future – a future which the young generation is demanding of us all, and a future which Open Schooling initiatives are already contributing towards making real.

By Skole i verden-nettverket
E-mail this page
>
Hope in a world of plastic: An open schooling experience