A varied selection of speakers gathered to officially launch the SEAS-project. – We are facing an existential threat and the school is a key institution for driving change, project coordinator Erik Knain stated. 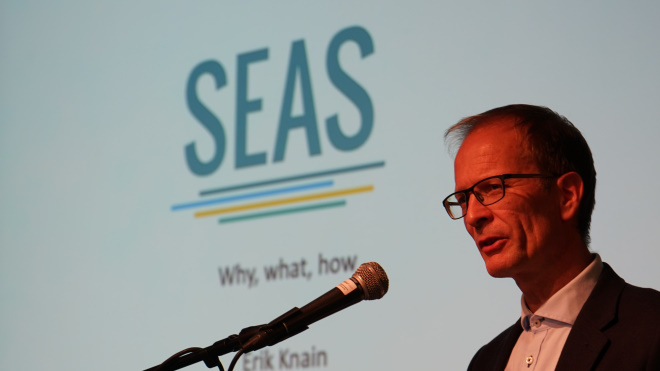 –  The school is a key institution for empowering students taking part in change processes, Erik Knain continued at the official launch of the Science Education for Action and Engagment-project (SEAS).

The Dean of the Faculty of Educational Sciences, Sten R. Ludvigsen, opened the seminar, which took place at The House of Literature in Oslo on the 3rd of October. The audience was shown a video clip from the recent school strike for climate in Oslo, which set the tone for the following talks.

The students participating in the strike voiced a strong will to make a difference in climate change and in wanting to live in a more sustainable society. However, they also voiced the need for schools to provide them with further opportunities to actively engage in understanding and changing society.

The need for transformative change

Linda Sygna, project coordinator in cChange, chaired the open seminar, and stated that what is different now is the urgency. – We need to develop the tools to create a more sustainable society, Sygna emphasised.

Similarly, Erik Knain told the audience that transformative change is needed, and the school is a key institution for this change to happen. The term "open schooling" is central to the project, he said, and this entails that we need to engage the schools to become agents of social change.

– On the one hand we have this scary threat, but on the other hand we have seen convincing, global movements led by young people, Knain argued.

Knain went on saying that we will need to shift towards a more inquiry based form of teaching in order to prepare the students for the future. The students must use knowledge in tasks that dont`t necessarily have a clear answer, he explained.

The significance of learning science

Alfredo Jornet from the University of Oslo argued for the need to rethink the role of science education in a context of climate crisis and invited us to conceive of scientific literacy as a form of activism, and not just of learning. Professor Karen O` Brien from the University of Oslo underlined how we need to realize that change will involve transformation: physical and/or qualitative changes in how we live and how society is structured.

– The future is a choice, Karen O`Brien underlined

The seminar concluded with a panel discussion on the topic of open schooling and the call for change and what is missing from schools in terms of dealing with climate change.

By Magnus Heie, Department of Teacher Education and School Research
E-mail this page
>
– We are facing an existential threat and the school is a key institution for driving change